You helped us raise over £2250 for much needed funds for repairs to our two churches, had some fun along the way and won some great prizes! A big thank you!

Including the (Not Quite) End of Lockdown Raffle

The Osbaldwick and Murton Churches Summer Fayre made its long-anticipated return on Saturday 3rd July. This year - and for the first time - the event was held on the Village Green.

Those of us nervously monitoring the weather forecast in the days leading up to the event turned out to be rightly concerned as the heavens opened just after lunchtime, but fortunately most of the gazebos were up by then and there was plenty of space to shelter! Although it seemed an age at the time, the rain eventually passed over and it was soon time to welcome the first visitors.

The weather wasn’t the only thing that didn’t go to plan as our fayre opener - York Town Crier Ben Fry - had to self-isolate since his radio co-host had tested positive for COVID-19 days earlier. The opening baton was passed to Rev Jan Nobel who did a great job despite not having a bell, a uniform or quite such a loud voice!

We were blessed with a large range of stalls selling everything from home-grown plants to jewellery and cakes and refreshments. No church fayre would be complete without a tombola, wine raffle and the support of other particularly good causes.

As the fayre got underway, the community came out to show their support. After a year of restrictions on social interaction, it was great to see so many people coming together and clearly having a very enjoyable afternoon. This felt as important an achievement as the fundraising itself.

As the afternoon progressed, the sun made the briefest of appearances as the anticipation of the big fundraising draw grew! Raffles are a staple of church fayres, but this was a bit different - a combination of big cash prizes and a long list of other very desirable prizes. Thanks go to our prize sponsors for their generous donations.

A special mention for the local residents who run the Yorkshire Soap Company and who so generously supported the event with a very welcome financial donation and prizes for the draw.

And then it was time…. for the big fundraising draw. Congratulations to our winners:

Check out the photos. 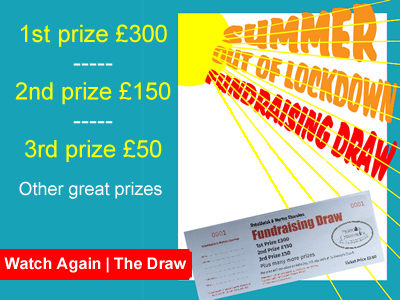 In total the combined proceeds of the summer fayre and the big fundraising draw were over £2,250 which is a fantastic achievement, and we would like to say a big thank you to everyone who contributed in whatever way they were able to.

We would also like to thank all those who made the summer fayre possible, particularly to Glenn Booth who once again made it happen. To all those who helped set up before the rains came and helped dismantle after the rains and the crowds had gone, thank you.

A special vote of thanks to Professor Fiddlesticks who kept the youngsters entertained, and to Matt the paramedic who drove over from Leeds to attend as a voluntary resident first aider to enable us to comply with the risk assessment guide. He enjoyed it so much he wants to come back next year. And not forgetting the Police Community Support Officers for being there and supporting us.

Finally, to everyone from Osbaldwick, Derwenthorpe, Murton who came to show their support as well as those who came from further afield. It was a brilliant afternoon with a real community feel to it.

Thank you to our prize sponsors